Home » Difference between a Switch and a Router
Hardware Support

Difference between a Switch and a Router 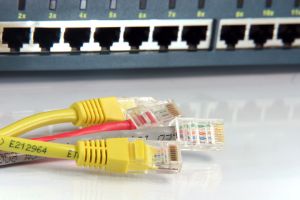 A Switch is network device which connect all network device on a local network.  The Switch routes the data at the data link layer 2 of the OSI model. Switches that additionally process data at the network layer 3 and above are called layer-3 switches or multilayer switches.
A Router on the other hand is a sophisticated piece of network device that forwards data packets between computer networks, creating an overlay internetwork. Many routers today are, in fact, little computers dedicated to the task of routing network traffic. In simple terms a Router is a device which helps you connect your office network to Internet, allows the network Administrator to router data, traffic directing, manage speed etc.  A router is connected to two or more data lines from different networks. Like a Switch, a router has multiple data line and when a data packet comes in one of the lines, the router reads the address information in the packet to determine its ultimate destination. Then, using information in its routing table or routing policy, it directs the packet to the next network on its journey. Router comes in different shapes and sizes including Wireless and Gigabit routers. Routers are needed to connect more than one devices to the internet. Today most of the routers also acts as a Switch having 4 or more LAN ports.
Synergy IT is leading Network Support company offering Network support and sale on Routers and Switches across Canada.

Deploying or Migrating to Windows 8

Usually people gets confused on which is the router and a switch and how does they differ from one another. A switch works like a hub, the difference is that switches can receive and send information at the same time which works faster than a hub. A router allows you to give all your devices or computers access to the internet using one modem.