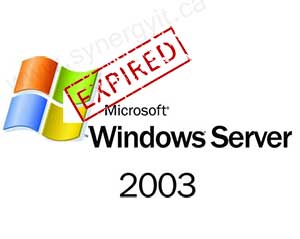 Well, Windows Server 2003 support end date is nearing and we still see a considerable number of companies who haven’t’ upgraded or migrated their server. It is critical time as July 14, 2015 is the last day and after this date Microsoft will completely end support for Windows Server 2003/R2 which means:

Call it an Excuse or roadblocks but we hear a lot of objections to Server 2003 upgrade. Here are some for your reference:
Reason 1: We can’t afford to migrate. The management is not approving the budget:
Not migrating is more costly in the end. Two important considerations are the costs and the risks of not migrating. Costs will include adding or dramatically improving an intrusion detection system, more advanced firewalls, network segmentation, and so on—all simply to isolate Windows Server 2003 servers. There will also be costs for maintaining aging hardware and potentially the cost of a Microsoft Custom Support Agreement.
Why spend all that money to just maintain and attempt to defend a static state with no additional benefits? If you are going to spend the money anyway, wouldn’t it make more sense to use it to migrate to a more modern operating system with numerous additional benefits?
Reason 2: We don’t have time to migrate.
You will need to prioritize what needs to be moved and begin to work on the highest priority items first. The sooner you begin the migration, the sooner you will have a more modern platform. Delaying migration is simply putting off the inevitable. The time to start is now.
Reason 3: I can continue to get Windows Server 2003 support through a third party.
This may be promised, but it can’t realistically happen. No one can effectively support Windows Server except Microsoft. Microsoft is uniquely positioned to develop, support, and maintain its own product offerings without equal. When someone else promises to continue the same level of service, it’s something that factually cannot be done. You should confirm exactly what support this third party is offering you.
Reason 4: We’re just going to virtualize Windows Server 2003.
No matter which hypervisor container is used, virtualized instances of Windows Server 2003/R2 remain unsupported. Virtualization may play a part in your migration strategy, and we would encourage you to look at Hyper-V (which comes at no additional cost with Windows Server 2012 R2) for any virtualization you decide is needed.

This is a real critical time for all Customer operating Windows Server 2003. Don’t wait for the disaster to happen, make it secure for you and your organisation. Visit us for support and upgrade to Server 2003

How to Safeguard your Business

Challenges with Networking resoloved with Server 2012

All about Windows Server 2012 R2 Essentials

How to Safeguard your Business